Avail our services and get 20% off or a Free portrait photograph.

Your shopping cart is empty

All in "Wedding Photo Shoot" 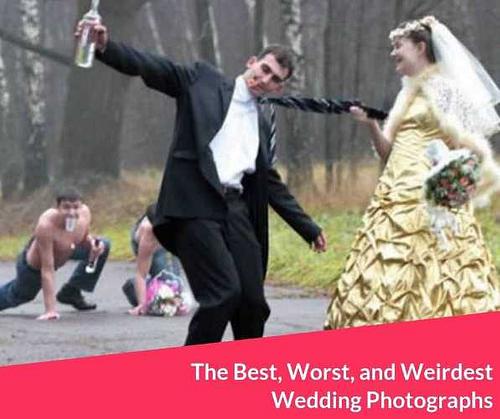 Wedding photography is one of the essential parts of wedding planning. These days every couple invests a lot of time in finding the perfect wedding photographer who can capture their special moments.

The job of the photographer is no more restricted to clicking random photos, like in the past. They have the responsibility to grab the glimpse of special moments. They need to creatively capture exclusive shots that turn the wedding stills into a memory of the lifetime for the bride and the groom. The wedding photography needs to be perfect with different poses and candid pictures, which can mesmerise the couple and their family.

The creativity of the photographer is visible in his past work. Not all captures can be useful. Photographers tend to discard the photos that are not suitable for the wedding album. However, sometimes the quirkiest and weird photos get etched in the memory forever.

Wedding moments are full of fun, crowd, times of fatigue, and warmth. Amidst this time, photographers tend to be at their creative best click a variety of wedding photographs. Don’t miss the best, worst, and weirdest wedding photography ideas we’ve rounded up for you below.

The picture says it all, with its fantastic composition, conceptualisation, lighting and the ultimate capture. This wedding photo is a complete picture that the couple could, in fact, frame and keep in the house. The photographer plays with the natural light and keeps the couple in the shadow. The lack of light on the couple adds to the beauty due to the overload of love that can be felt by the viewer just by looking at the picture. The location where the still is shot adds to the essence of the whole image.

Added to that is the flowing dress or cloth, which shows the feeling of love floating in the air. The proximity of the couple speaks volumes, even without their facial expression being visible to the audience. The effort made by the photographer can be seen exclusively in the image. Overall the picture can be said as one of the best wedding photographs seen till date.

2. The Roadway to Love

The photo is not only highly creative, but it is also very eye-pleasing. The monochrome effect has enhanced its meaning and essence. It looks like a roadway to love where the couple resides. The white patch in the sandy terrain created with the bridal gown’s train is unique. It is like a path which ultimately takes us to the couple in a thought-provoking way. The groom, on the other hand, stands to hold the bride in his black suit, which again merges with the black stretch of land everywhere.

From the image, it is evident that the photographer has put in a lot of thought over this picture. This wedding photo shoot must have surely taken a lot of effort on the part of the photographer. It looks like a white pathway created on a field of coal. The black and white effect is what mostly takes away the award for this being one of the best wedding photographs.

Though unique, this black and white photography fails to make its mark and falls amongst the worst wedding photos as the couple is hardly visible in it.

The picture provides a visual twist, and you might have to look twice to understand the whole meaning of the picture. Here it can be seen that the bride is giving her hand to someone out of the car window. We can see in the reflection, the father of the bride bidding her goodbye and kissing her on the hand. At the first look, it might get a bit confusing as to where the hand is. But this confusion is what enhances the theme of the picture.

The earring of the bride forms a teardrop on the cheeks of the bride’s father in the reflection. The whole composition of the picture is so meaningful and perfect that it makes the viewer feel the emotions of the father and the bride. It is a sad moment when the father has to say goodbye to his daughter when she gets married. This picture captures this emotion to the fullest and becomes one of the best candid wedding photography.

4. Cheers to the New Couple

From the picture itself, it can be seen that the photographer has let his imagination extremely wild. The picture has no meaning or composition whatsoever, and the depiction is not suitable for the ceremony. The majority of the image has been done through editing, which is also not very good. Why the photographer has thought to out the bride, and the groom in two champagne glasses is unknown. The bride and the groom can be seen immersed in two half-filled champagne glasses.

The quality of the picture is also not very nice, and the whole scenario has no essence. It is understandable that this was supposed to mean as a celebration of the bond. However, the photographer could have thought of something more creative than editing the photos of the bride and the groom in the champagne glass. This can be said as one of the worst wedding photo shoots done by any photographer.

It can be established from the picture that is another worst wedding photograph that can be present. The picture relies heavily on the Photoshop skills of the editor, which was not needed. The photographer may have tried to create a mythological effect with the half human half animal picture, but it was a complete failure. This picture should not have made its place in the wedding album since it is a terrible shoot.

The photographer has hugely failed to use his creative skills for good and has emerged with something that makes no sense at all. The image does not look like a wedding picture at all but seems to be a picture out of a comic movie or novel. This wedding photograph idea is not only bad but touches the line where it can also be called extremely funny.

This picture could have been a good photograph, but the photographer was not able to compose the picture to get the desired effect. At this position, it looks like the lower portion of the bride is that of a horse. At the first view, it looks exactly like the bride is a top part human and lower part horse. You would have to look at the picture twice or more to distinguish the bride from the horse.

The photographer either did not pay attention during the shot or was not aware of how the picture would look once captured. He or she should have viewed the picture or should have seen how the whole frame would look. The romantic gesture that the photographer wished to display through this picture evaporated just by seeing the bridal horse, or the bride on the horse.  Even the groom is negligible in the picture as all eyes are drawn towards the bride and the horse.

Only one word comes while seeing this weird picture. This is maybe one of the weirdest wedding photos seen till date. The bride has been reduced to the size of Thumbelina by the photographer. This picture may have been quite weird for the couple as well when they had seen it later. This picture has no concept or picturization, which makes it weird. The groom is seen holding the bride in his hand and trying to kiss it. However, the bride seems to be obstructing the kiss.

The photographer could have used their editing skills and creativity to capture a more meaning picture on the special day of this couple. If the photographer was aiming for a funny picture, he could have tried out many other ideas instead of this awkward photograph idea. However, this picture should in no way have established itself in the wedding album.

8. Stuck Between The Teeth

It is understandable that the photographer wanted this to be a romantic picture. However, he was not able to make the full use of his creative mind for the picture. As a result, this picture is nothing but an awkward pose of the bride and the groom with their wedding bands stuck between their teeth. At first glance, it looks like something; maybe food is stuck between their teeth. The golden bands are negligible for a second and will only be registered when you look at the picture for more than a second. This is one pose that could have been avoided by the photographer as candid wedding photography.

The only credit that the picture deserves is for the sense of humour that is clearly shown by the photographer as well as the couple. However, the rest of the picture is nothing short of awkward. The groom is understandably carrying the bride while he is inside her dress. This alone crosses the limit of awkwardness that a single wedding photograph could hold. The photographer could have aimed for other funny poses rather than opting for this awkward picture to be in the funny wedding album for over and for all to see. He should have explored his options for different funny poses.